Skip to content
Options With Highlight Colours are Correct Answer
1.

Based on the transport layer header shown in the diagram, which of the following statements describe the established session? (Choose two.)
• This is a UDP header.
• This contains a Telnet request.
• This contains a TFTP data transfer.
• The return packet from this remote host will have an Acknowledgement Number of 43693.
• This is a TCP header.
2. With TCP/IP data encapsulation, which range of port numbers identifies all well-known applications?
• 0 to 255
• 256 to 1022
• 0 to 1023
• 1024 to 2047
• 49153 to 65535
3. Why are port numbers included in the TCP header of a segment?
• to indicate the correct router interface that should be used to forward a segment
• to identify which switch ports should receive or forward the segment
• to determine which Layer 3 protocol should be used to encapsulate the data
• to enable a receiving host to forward the data to the appropriate application
• to allow the receiving host to assemble the packet in the proper order
4. Which OSI model layer is responsible for regulating the flow of information from source to destination, reliably and accurately?
• application
• presentation
• session
• transport
• network
5. 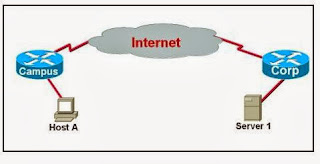 Refer to the exhibit. Host A is using FTP to download a large file from Server 1. During the download process, Server 1 does not receive an acknowledgment from Host A for several bytes of transferred data. What action will Server 1 take as a result?
• create a Layer 1 jam signal
• reach a timeout and resend the data that needs to be acknowledged
• send a RESET bit to the host
• change the window size in the Layer 4 header
6. Why is flow control used for TCP data transfer?
• to synchronize equipment speed for sent data
• to synchronize and order sequence numbers so data is sent in complete numerical order
• to prevent the receiver from being overwhelmed by incoming data
• to synchronize window size on the server
• to simplify data transfer to multiple hosts
7. Which two options represent Layer 4 addressing? (Choose two.)
• identifies the destination network
• identifies source and destination hosts
• identifies the communicating applications
• identifies multiple conversations between the hosts
• identifies the devices communicating over the local media
8.

Refer to the exhibit. In line 7 of this Wireshark capture, what TCP operation is being performed?
• session establishment
• segment retransmit
• data transfer
• session disconnect
• Bottom of Form
9. Refer to the exhibit. What two pieces of information can be determined from the output that is shown? (Choose two.)
• The local host is using well-known port numbers to identify the source ports.
• A termination request has been sent to 192.135.250.10.
• Communication with 64.100.173.42 is using HTTP Secure.
• The local computer is accepting HTTP requests.
• 192.168.1.101:1042 is performing the three-way handshake with 128.107.229.50:80.
10. What is dynamically selected by the source host when forwarding data?
• destination logical address
• source physical address
• default gateway address
• source port
11. What are two features of the User Datagram Protocol (UDP)? (Choose two.)
• flow control
• low overhead
• connectionless
• connection-oriented
• sequence and acknowledgements
12. What mechanism is used by TCP to provide flow control as segments travel from source to destination?
• sequence numbers
• session establishment
• window size
• acknowledgments
13. Which transport layer protocol provides low overhead and would be used for applications which do not require reliable data delivery?
• TCP
• IP
• UDP
• HTTP
• DNS
14. Which information is found in both the TCP and UDP header information?
• sequencing
• flow control
• acknowledgments
• source and destination
15. Which three features allow TCP to reliably and accurately track the transmission of data from source to destination?
• encapsulation
• flow control
• connectionless services
• session establishment
• numbering and sequencing
• best effort delivery
16. During a TCP communication session, if the packets arrive to the destination out of order, what will happen to the original message?
• The packets will not be delivered.
• The packets will be retransmitted from the source.
• The packets will be delivered and reassembled at the destination.
• The packets will be delivered and not reassembled at the destination.
17. Which is an important characteristic of UDP?
• acknowledgement of data delivery
• minimal delays in data delivery
• high reliability of data delivery
• same order data delivery
18. After a web browser makes a request to a web server that is listening to the standard port, what will be the source port number in the TCP header of the response from the server?
• 13
• 53
• 80
• 1024
• 1728
19. Which event occurs during the transport layer three-way handshake?
• The two applications exchange data.
• TCP initializes the sequence numbers for the sessions.
• UDP establishes the maximum number of bytes to be sent.
• The server acknowledges the bytes of data received from the client.
20.

Refer to the exhibit. What two pieces of information can be determined from the output that is shown? (Choose two.)
21.